Society Benefits when Public Restrooms are available in our Parks, Cities, Towns and our Suburban Communities

The restroom challenged avoid strolling downtown areas that lack public facilities.   Enclosed Mall’s have numerous restrooms.   Being in the Mall after the stores close is not a problem.   Why risk heading into a town with no alternatives.  Asking permission to use a restaurant’s restroom, when not a customer, is not always an acceptable alternative.

Many are familiar with the negative spiral caused by long standing graffiti.   People also react to the smell of urine near an underpass or crevice in the inner city.   No police force is sufficiently staffed to stop public urination when facilities are unavailable.  Cities with thought-out distributions of public restrooms and portable toilets have few ‘civility law’ violations.

Get People Out of Cars and Into Mass Transit

During periods of peak traffic congestion, everyone wishes other drivers would use an alternative transportation mode.   For someone sensing a filling bladder, traffic jams are a concern, but there are options.   Using a Mass Transit with restroom-less terminals leads to a trapped feeling.   Even when faster mass-transit doesn’t allow the emergency pull-off.   Conversely, a transit system with convenient toilets is preferable to hoping one get off the highway soon enough to locate a fast-food establishment.

Bicyclists and particularly walkers, typically experience extended commute times.  The restroom challenged map amenities along the way.   If not available, they are forced to drive.

“Holding it” directly impacts an individuals health, but know there may not be a restroom when you need it can reduce fitness activities.  Not only does it reduces one willingness to leave the car, the restroom challenged or parents with children are loath to walk in a town or any area where facilities are lacking.  Some young women will avoid participation in sports if played at an athletic field without at least a chemical toilet.  Many people are struggling with obesity.  In the United States obesity is a National concern.   Lack of public toilet facilities is an addressable ‘impediment to fitness’.

When the lack of public facilities force even the most law-abiding person to find relief in the wrong place, everyone suffers.  Not only does it smell, it spreads disease.  Properly cleaning a subway stairwell or worse a subway car is significantly more difficult and expensive then swabbing a toilet.
Help Children Learn
When school children are allowed sufficient restroom breaks, not only does it improve their physical health it improves their classroom concentration.   Recurring restrictions can cause a child to dread class time. 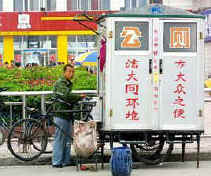 A city worker in the northern Chinese city of Datong parks a public toilet mounted on a bicycle outside the city’s train station Tuesday, Aug. 20, 2002.  The characters on the side read, “A clean Datong environment, a toilet for the masses.” Providing more public toilets has become a key urban planning issue in China, which is trying to make its cities cleaner and more pleasant.
Source: PSAI

President George Bush   … we want there to be a visitor’s center that’s worth going into. We want the toilets to flush…. … so that the people, when it comes to using their own park, are able to do so in a comfortable way.

TOPEKA,KS … in addition to the concrete, skaters complain about the lack of a restroom nearby. Park regulars say it is not uncommon for kids to urinate in public and it causes an unpleasant smell.
WIBW-TV ‘Skaters Complain New Skate Park Isn’t Adequate’  6/20/08

ARCATA CA — … the Chairman of the County Association of Governments, arguing that public restrooms are “an essential part of a civilized city”
Source: Meserve: ‘A progressive voice’ The Times-Standard 10/21/2006

Now Salisbury’s Downtown is reputed to be a place where people are forced to urinate in public if they must relieve themselves…  These are for the most part people with jobs and money who are using public transportation to get to and from work and/or shopping. Desperate people do desperate things.
Source: Delmarva Daily Times Sep 26, 2005

NASHVILLE, Ind. [public restrooms] for our visitors,”  “If they are not comfortable, and if we do not have the things they need, they will not want to come back.”
Source:  Associated Press Mar 1’05

Wash DC …”They have a musky, urine smell all the time,” said Angel Spates, a federal worker from Manassas who rides the Orange Line. “You can smell it as soon as you get on. It’s awful.” Gregory Robinson, 31, who cleans Green Line cars from 8 p.m. until 4:30 a.m. each weeknight, acknowledged that urine in the trains is a problem
“Metro’s Not-So-Sweet Smell of Success”  Washington Post August 3, 2002; Page B01

FAIRFAX, VA …You’ve probably run across this, but if Metro allowed access to bathrooms, maybe people would stop using their elevators for urinals.  We took our bikes on Metro Saturday (using the elevators) and as usual, it smelled like pee…
Source: email dtd  Aug 18 ’03 from Scott O

Often school children are not allowed sufficient restroom breaks, it impacts their physical health and reduces their classroom concentration. Many school teachers view toilet use as a privilege rather than a human need. Read more about this issue as a human rights violation at the following link:
Laurie Couture [Child Health Advocate]

….There was a time when it used to cost a dime to use public bathrooms. But this retail establishment knew how to keep their shoppers happy: “FREE TOILETS” is spelled out in classic Art Deco typography… …Excuse yourself for a visit here today….
Source: ‘Lunchtime tourist’ Linda Koutsky Downtown Journal, Minneapolis, MN 10/11/06

VT WOODSTOCK — The lack of public facilities has been a longstanding problem in this tourist destination… …The facilities were open only during the fall tourist season, however, … …there was a hue and cry when it closed for the season.”…
Rutland Herald ‘Woodstock weighs keeping public restrooms open’ 12/14/06

MEDIA: Let us connect you with the best expert to support your news and media projects.

INVENTORS, MANUFACTURERS, SUPPLIERS, & SERVICE PROVIDERS: We want to hear your stories about how you are leading change in restroom design and maintenance!